Before we start, I just want it to be known that before receiving this game for review, I knew nothing about Fairy Tail or its expansive universe. I had tried getting into the anime and manga, but I never found the motivation to continue until playing this game.

Fairy Tail is a turn based RPG adaptation of the anime, set during the Tenrou island arc, ending at the Tartarus arc. For those who aren't familiar with Fairy Tail, the game starts at episode 96 and ends at Episode 265 of the anime. Which is more than enough content for a single game.

Many might wonder why not start the game from the beginning and at first I felt the same way. Until I realised that the point at which the game starts off is when the characters lose their powers and they become the lowest rank guild in Fiore.

I'm not a fan of anime RPGs because they tend to be incredibly monotonous, especially with side quests. But Fairy Tail is different. It gives you a set goal, you go out and complete these side quests to rank up your guild to S-Rank and earn more jewels, new skills and items. The visuals are impressive. Although I'm not the biggest fan of the 3D-anime-artstyle, both KOEI and Gust did a great job with matching it with the anime/manga. A few graphic glitches are apparent, however that is going to be resolved with a day one-patch, so I can't knock it for that. 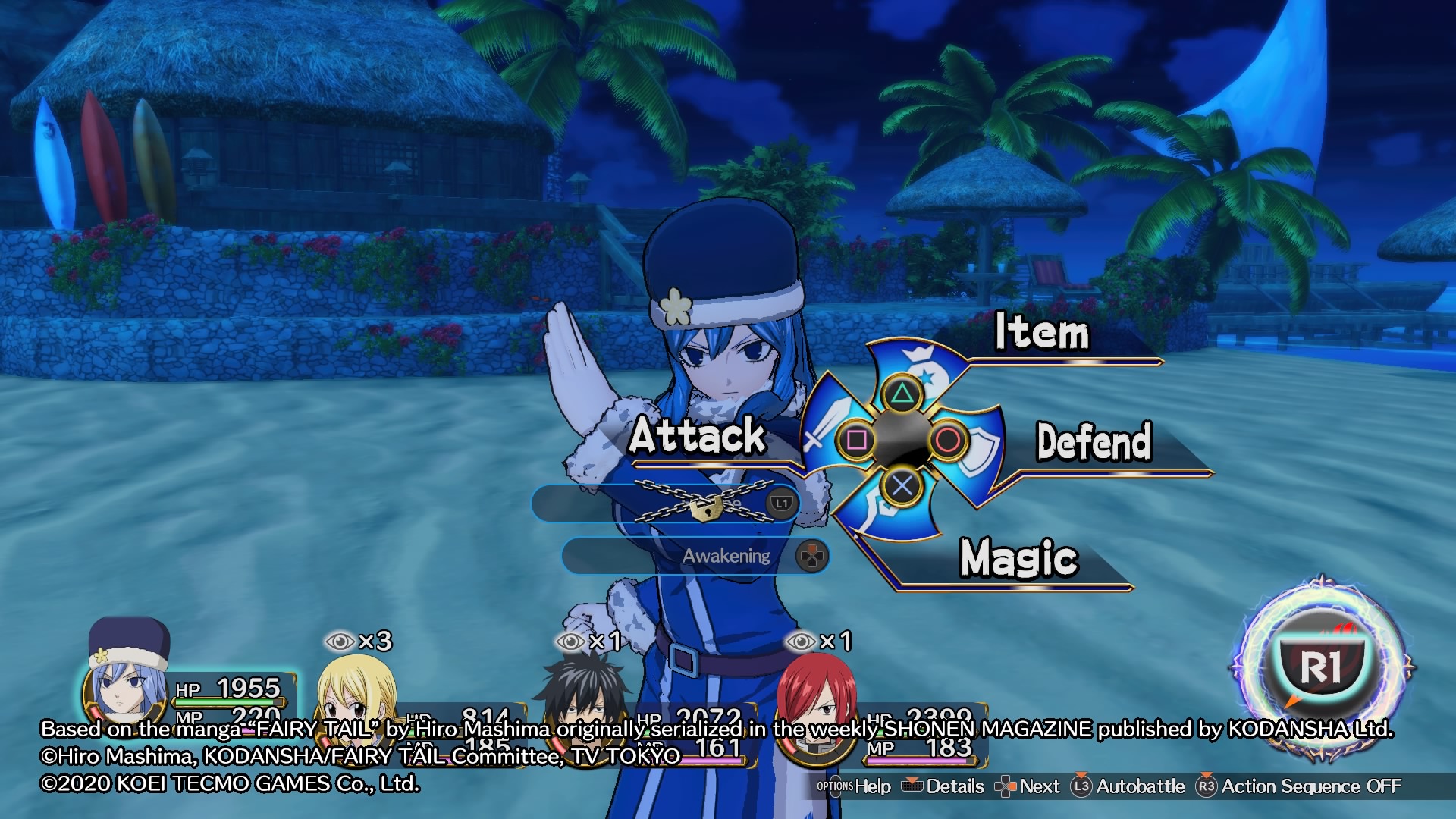 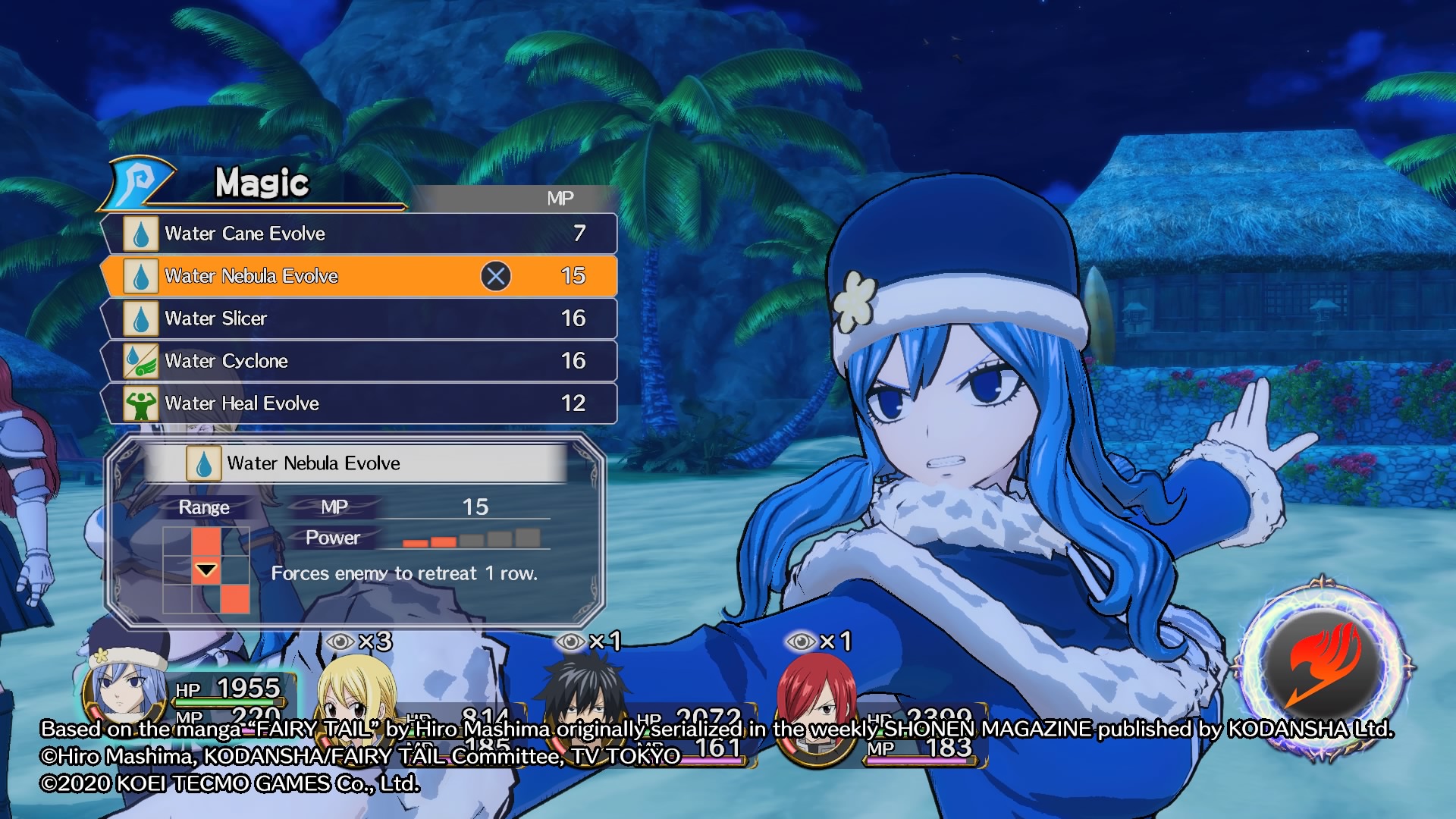 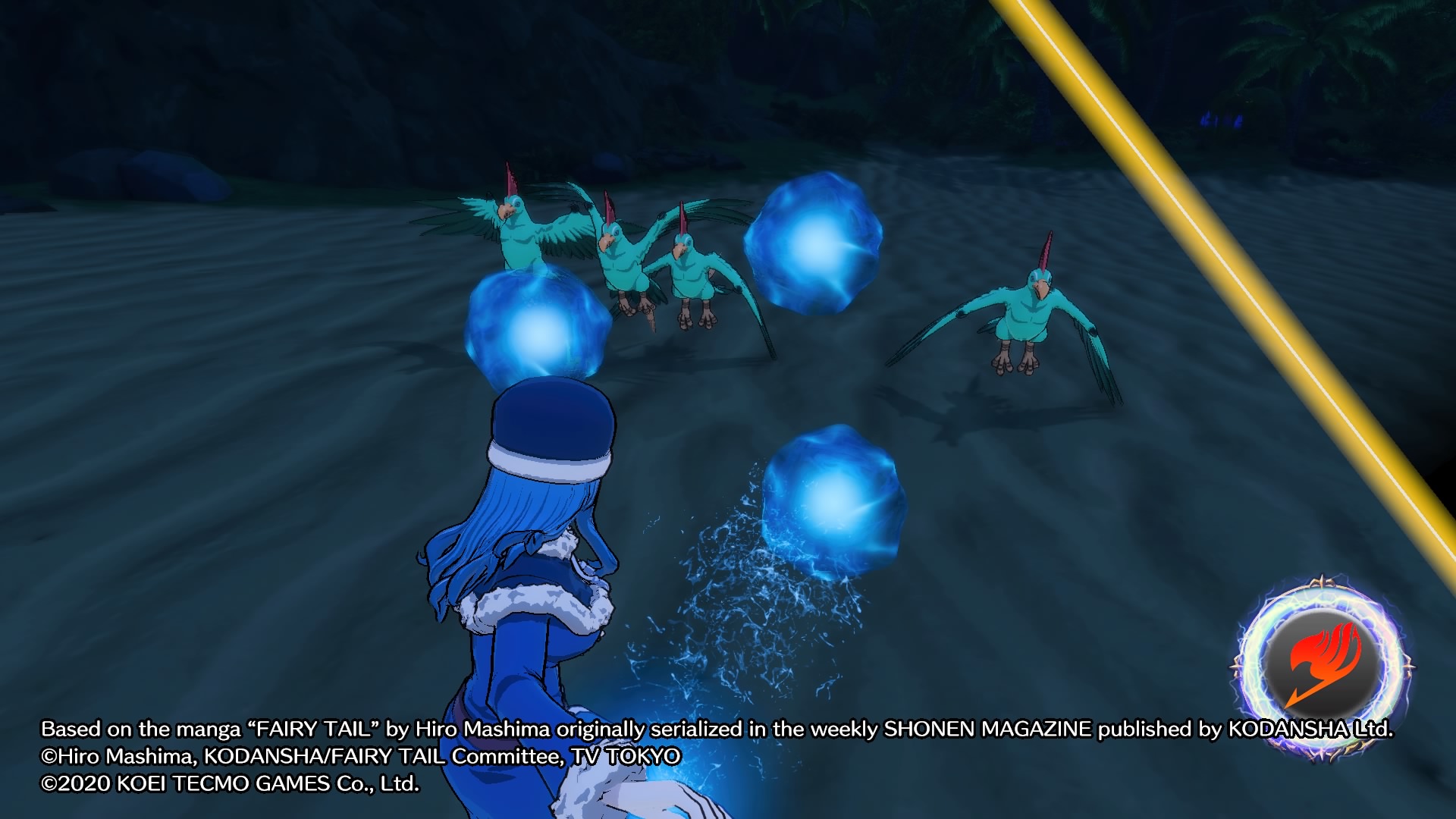 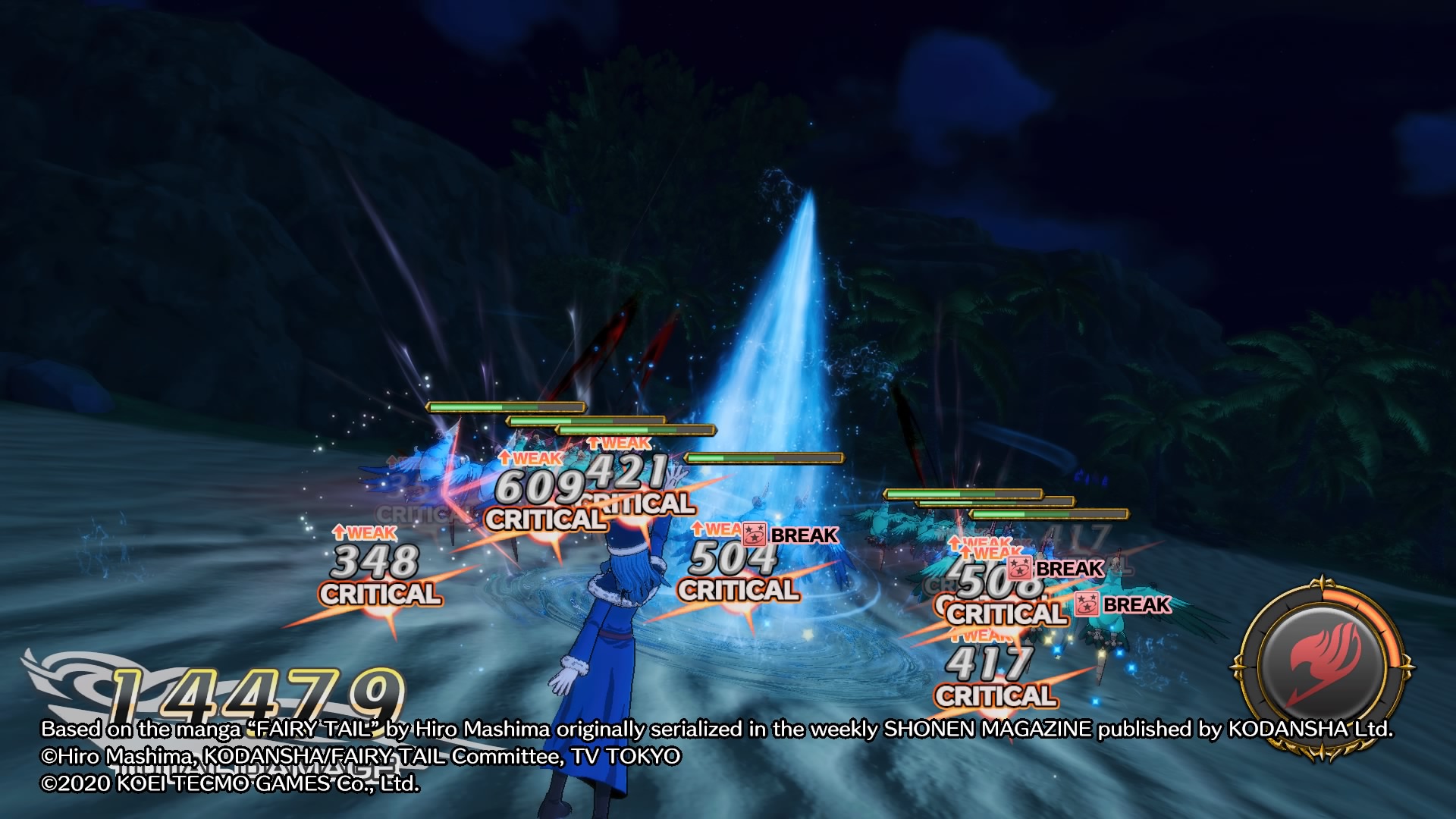 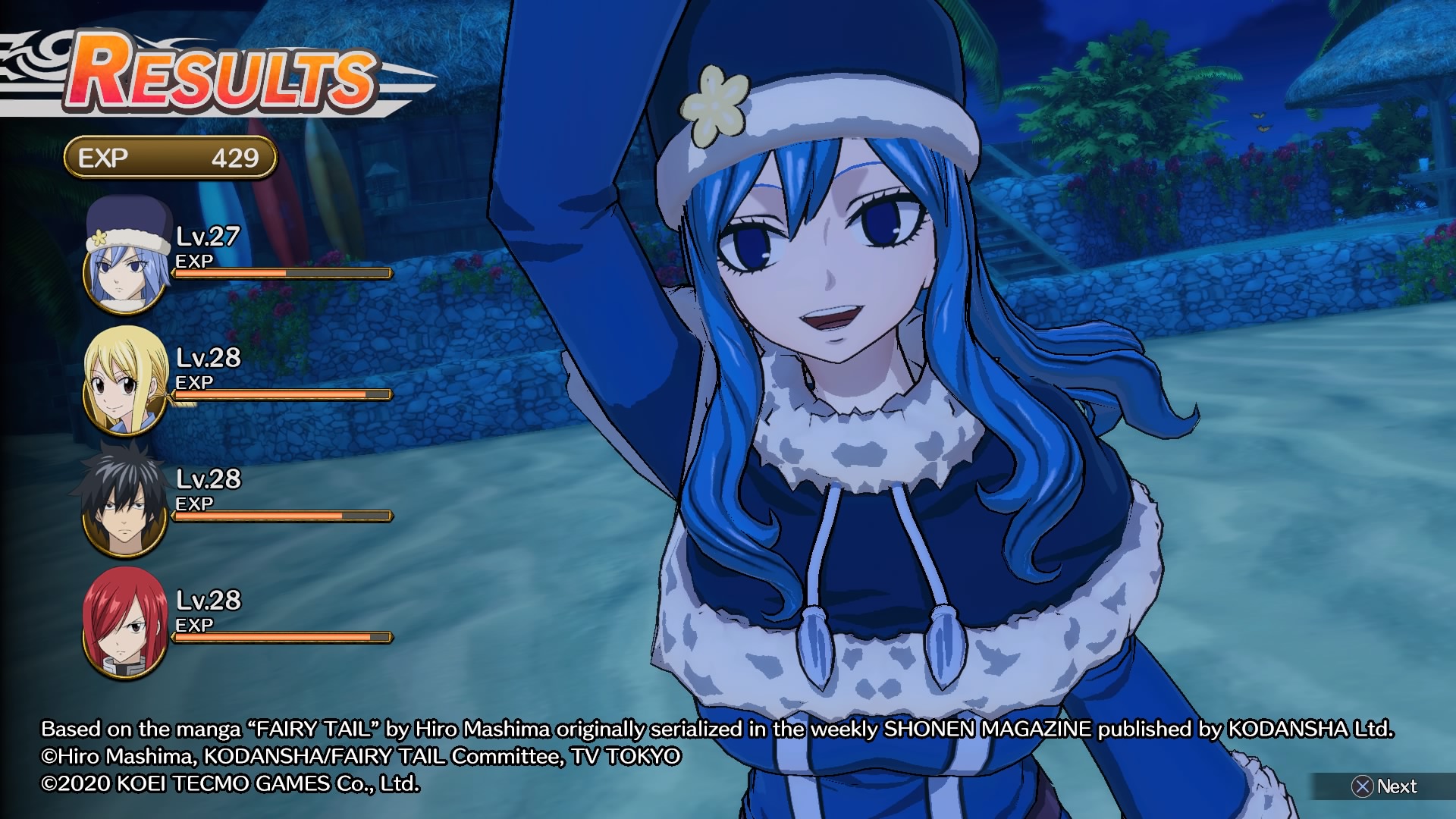 Animations in this game are incredibly fluid as you can tell when selecting magic in battle. Transitions between battle and the field are just beautiful. Gust has taken a lot on board from previous RPGs they've developed. I've noticed particle effects from Ryza and Blue Reflection returning, as well as dynamic foliage. I know many people won't notice or care about those, but I feel that these little touches add to the overall charm of the game.

The game jumps between visual novel style conversations in 2D with beautiful key art, then that same style with character models. I'm referring to the scene where Erza meets up with Millianna during the Grand Magic games arc. At times I feel as if the game doesn't know what artstyle it wants to go for. The sudden changes in design in various scenes are a bit jarring.

Although the main cast received a dub by the original japanese voice actors, side characters are not voiced in their respective scenes. Example being the meetup between Erza, who has each of her lines voiced, and Millianna, who remains completely silent during the entire conversation.

It's odd, almost as if the voiced characters are having a one-sided conversation with themselves.

You would be familiar with the game's story if you've watched Fairy Tail. But having not watched the series, I felt as though it would be awkward for me to play and review this game - however Gust has done a great job at introducing newcomers to the Guild of Fairy Tail. The character levelling mechanic and character quests are references to past events and past character interactions. Let's take Juvia for example: When I first read a description of her character, I was not that excited to see her in action as she gave me yandere vibes. This changed drastically as soon as I unlocked her and saw how she acted towards Lucy and Gray. I was in stitches. One point I find to be incredibly charming is that most of the characters's quirks are present in the game, even if one might not notice them at first.

When increasing Juvia's rank you can see her hugging a wooden cut-out of Gray (to my knowledge, this is exclusive to the game but it keeps in line with Juvia's personality).

One of my favourite things about the game is its battle system, Strategy is a key aspect as certain attacks can be used to reposition enemies and hit a bigger amount of them with a single attack. The beautifully designed magic attacks make me feel like a wizard with every use.

This is also one of the reasons I love using characters like Erza, Gray or Lucy There is just so much going on with their attacks. It's so over the top and at times humorous (in the case of Lucy/Aquarius). I love it!

Much like in the Anime and Manga, Character Bonds are incredibly important. As you increase Bond Ranks, you increase your magic chain rate, basically allowing you to get more attacks and deal more damage during magic chains. Magic chains are extremely useful, allowing you to deal insane damage to opponents, break debris on the field access new areas or during duels.

Let's discuss duels. Duelling in this game reminds me a lot of duels in Dynasty Warriors 4, a 1-VS-1 battle in which only one person can emerge victorious. There isn't much point of doing it unless you want a serious challenge since you can't level up during duels. You do, however, gain new items upon first completion. Completing duels may be required to complete Guild Rank Goals, which are a set of goals you are given upon achieving a new rank.

The game gives you a lot to do and explore but it doesn't force you to do any of it if you don't want to. On some occasions, you may need to switch to certain characters or reach a particular guild rank to progress the story. But I like to take the game at my own pace, continually doing new requests, levelling up characters and their bonds before progressing the story.

You can even pop round to Lucy's house and visit Plue/Nikora, change your costumes, access the in game gallery and read up on some Fairy Tail Lore !

Speaking of costumes, I guess it's time to address the elephant in the room. Fan service! The game features a lot of fan service in the form of swimsuit costumes, previously mentioned side missions and even an entire CG scene centered around the characters swimming.That scene was one of the best rendered scenes in the game, I don't know how but it is. I get that fan service is not for everyone but the game deals with it appropriately (hence the PEGI 12 rating) and it's a constant reoccurrence in the anime.

Unlike other anime games, Fairy Tail excels in being faithful to the series without being dull or mundane. You know an anime game is good when you decide to watch the series from the very beginning. It's also worth noting that if you purchase a physical copy of the game, you receive a code for a free trial of FunimationNow!

+ 16 unlockable Characters (not including DLC)

+ Easy to pick up and play, especially for newcomers + Very Faithful to the Anime

- Missing Characters being introduced ONE week after launch, in form of Paid DLC

- Lack of character models, voice lines and animations for side characters like Scorpio/Capricorn

This review covers Fairy Tail for Playstation 4, Nintendo Switch, and PC. I would like to express my sincerest gratitude to Koei Tecmo Europe for providing me with the opportunity to play this game and write this review.